So today I thought I would highlight an activity that I loved when I was a child: Whirligigs.

For the first 8 years of my life, I grew up in Zimbabwe, a third world country towards the tip of the African continent.  While I grew up primarily in the capital city of Zimbabwe, I did spend school holiday’s in the country side with either of my grandmothers where there was no electricity or what most Americans would consider as normal toys.

My parents separated the year I was born and while my father was upper middle class, my mother was lower middle class, maybe even a class lower than that.  My first couple years of life, she used to rent rooms in other peoples homes.  That was our home: one single room.  My mother was so poor that I recently found out that she could never afford to buy a doll or other toys in the first few years of my life.

So when you don’t have access to premade things, you get creative.  Now when I say that I am not saying I came up with whirligigs: they have been around for at least 2500 years.  I say you get creative because you come up with ways to entertain yourself and your friends that does not require money.  And whirligigs were pretty easy to do that with.  Back then we used either buttons or metal soda bottle caps .

With the bottle caps, we used hammers or rocks to flatten them then used a nail to create the two holes in the center.  When I look back on it, I realize how dangerous we liked our fun.  One of the things we would do is get our whirligigs going and then try to cut the string of an opponent.  Whoever cut the string first won.  Keep in mind that the metal bottle cap edge was sharp and that when you have the whirligig going it is spinning at a really fast rate.  So when the string is cut, it does not stop spinning immediately.  So I can imagine if the cut whirligig went flying and cut either the two opponents or bystanders.  The good old dangerous days.

Anyway, I decided to do whirligigs today because they are inexpensive and for the most part, most families have the supplies already on hand. When I do these in class I prefer to use wood coins.  But I have seen DIYs online where they use cardboard.  But again you can use almost anything that is a coin shape.

So I also decided to see if I could turn different shapes: circle, star and square into a whirligig.  Check out the tutorial below … 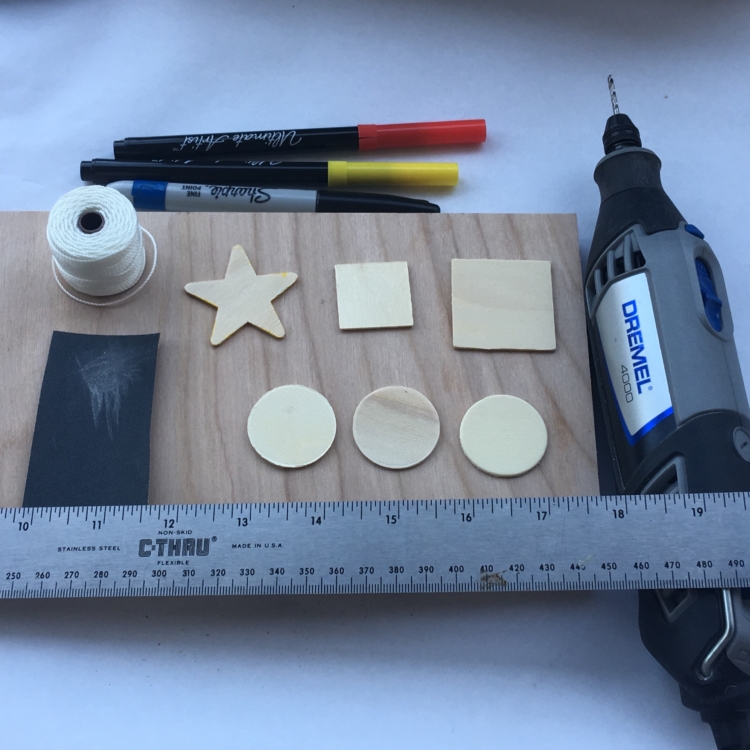 Supplies: wood shapes (as noted above, you can also use buttons or cardboard), string or yarn, ruler, markers.  The following are optional if using cardboard or buttons: Dremel, drilling board (this is a blog of wood I use to drill so that I don’t accidentally drill our tables) and sanding paper.

First step was to sand the edges.  Of note, I used wood circles from from Michaels under the brand Woodsies.  You can also get them on Amazon.  And I find that sometimes the circles need to be sanded .

I repeated the process on the square shape. 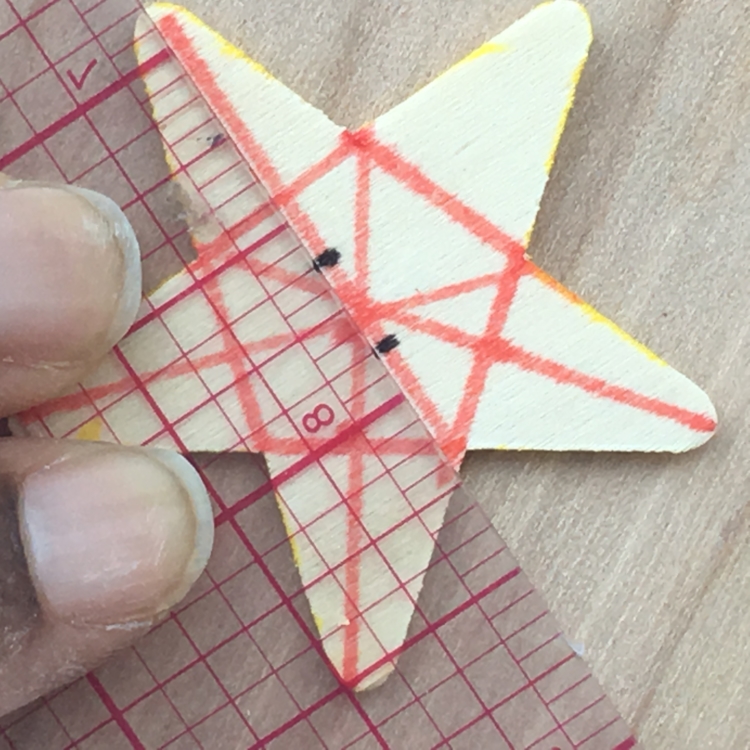 Next step is drilling the holes.  Basically you need your holes to be spaced about 1/4 inch apart, depending on the size of the shape.  Mark your drill points: for the star shape … 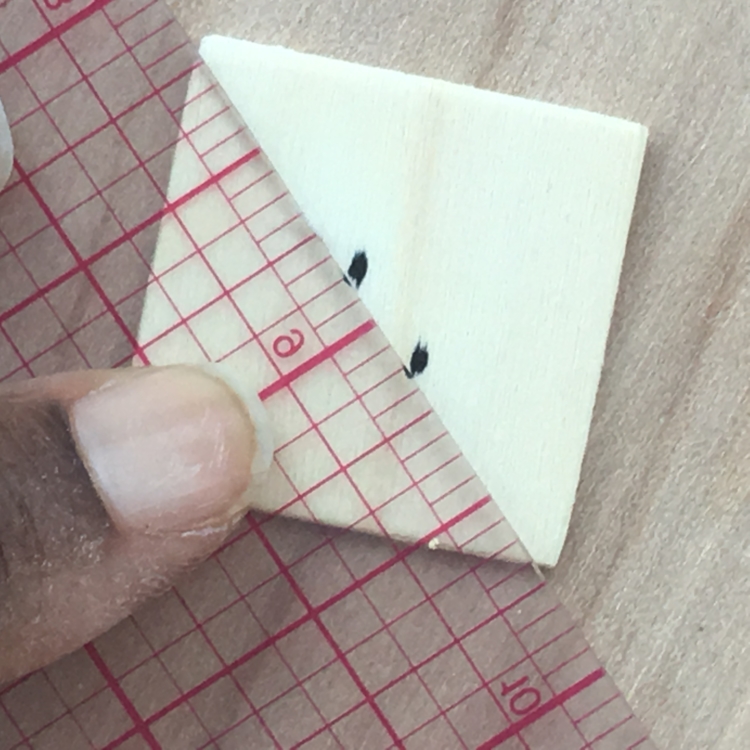 For the square shape … 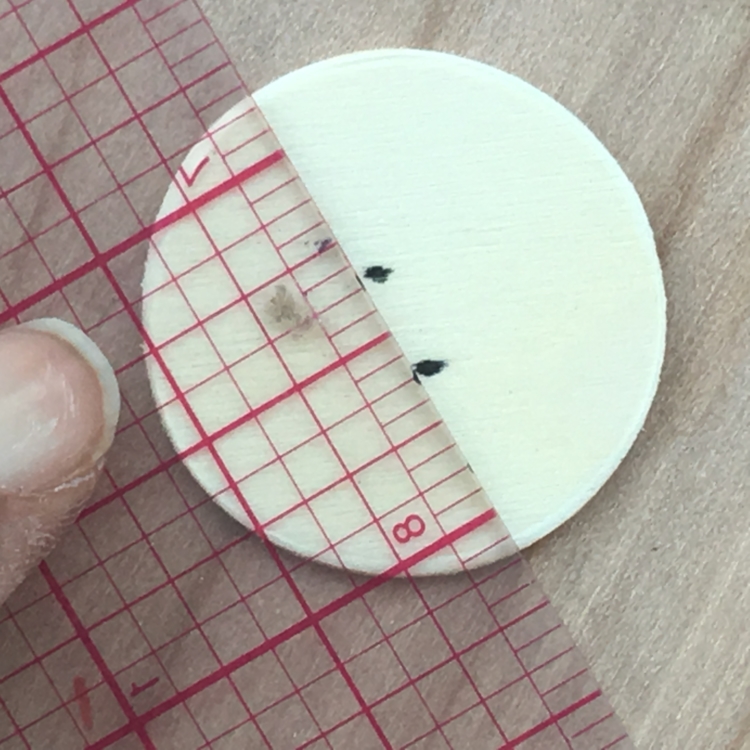 And finally for the circle shape. 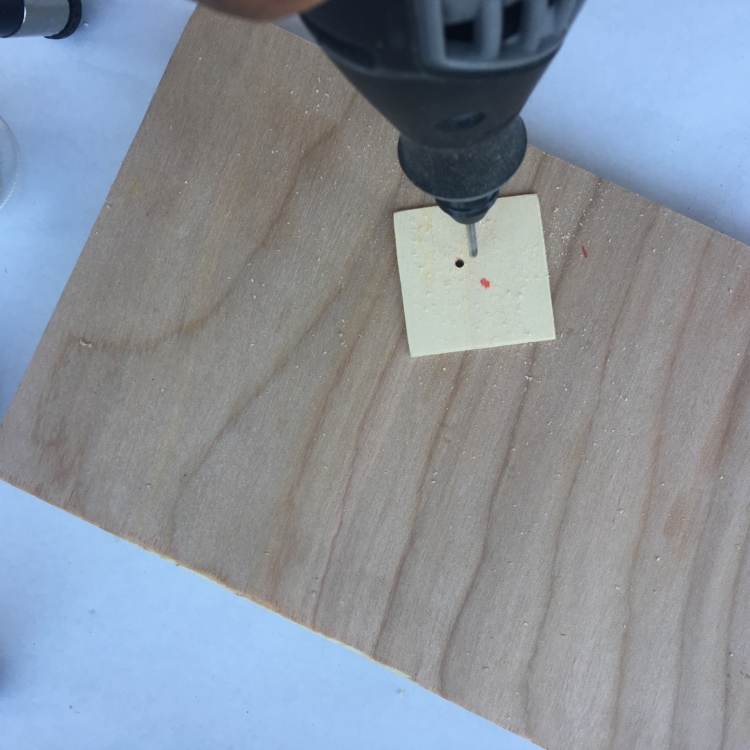 Then its drilling time.  One of my most favorite things to do.  I really need to come up with more crafts that require drilling. 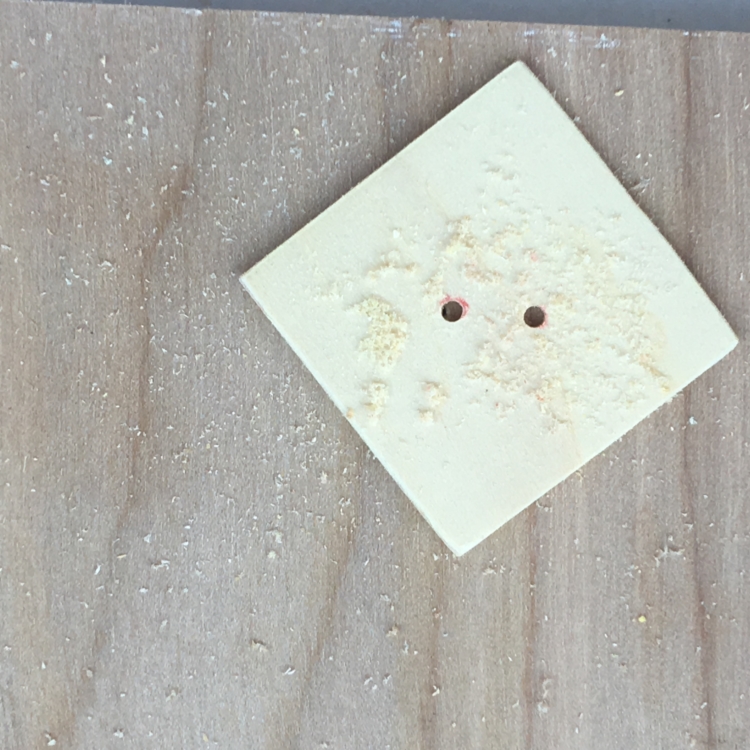 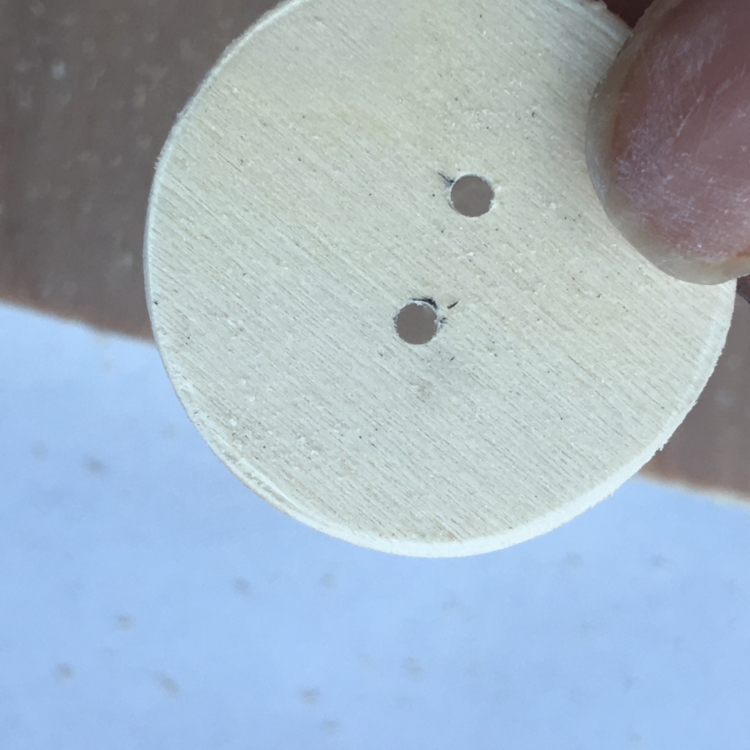 Now if you are gonna drill more than 1 of each shape, following the next steps to save you a little extra work as well as time. 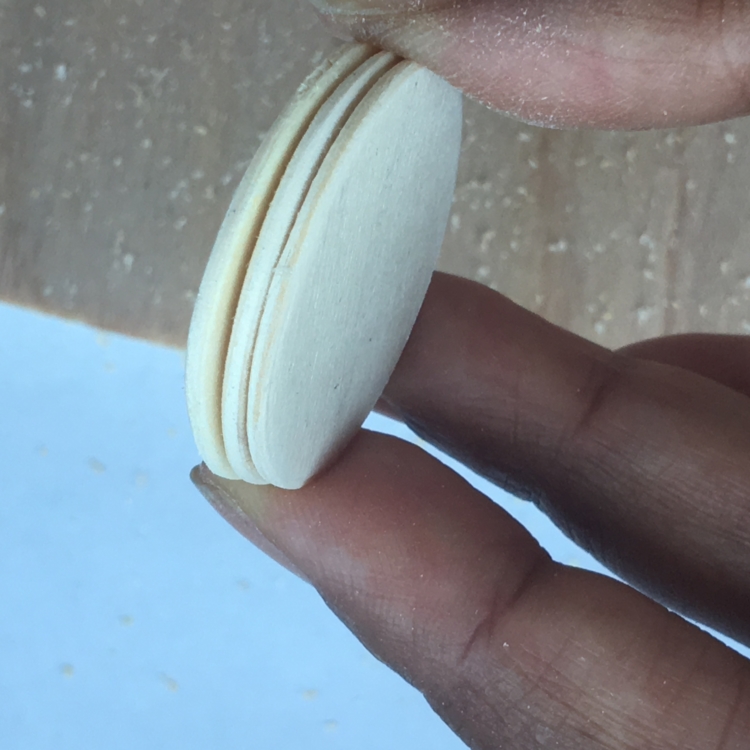 Put the pieces together as shown above making sure the circle with the just drilled holes is sitting on top.  Put the pieces on the drilling board and while holding the edges on opposing sides, drill through the two bottom circles, using the top disk as your guide. 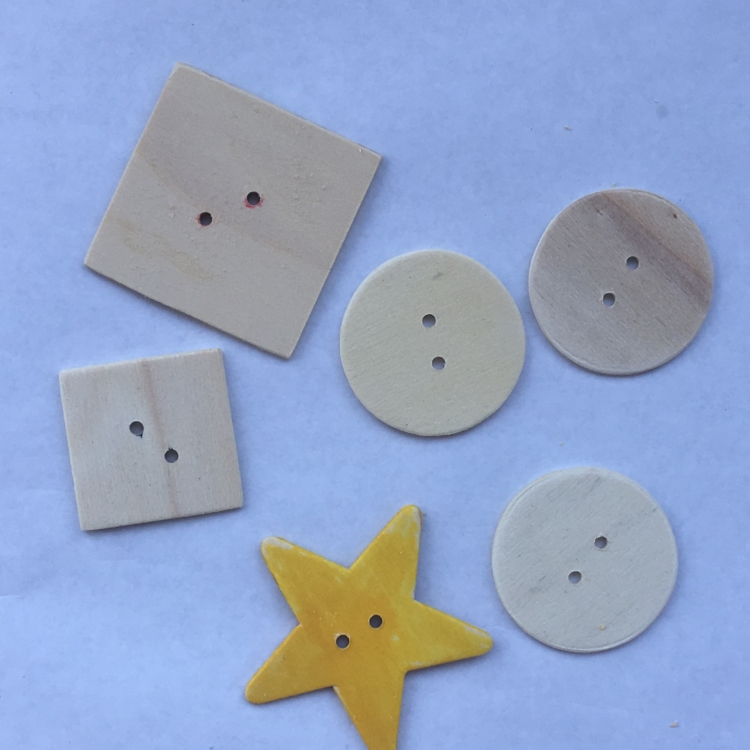 All shapes done and cleared of all the drill dust. 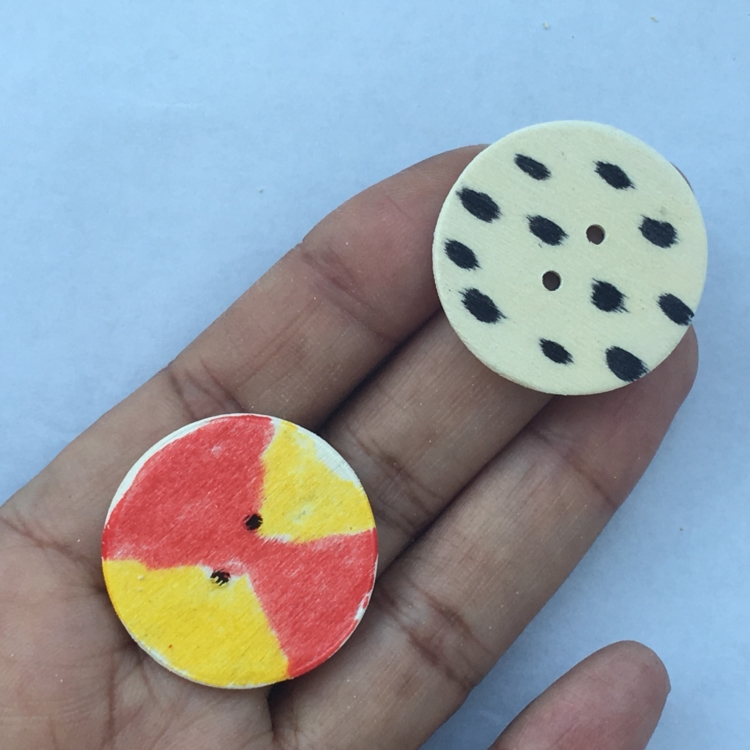 Now is decorating time.  Designs on one side … 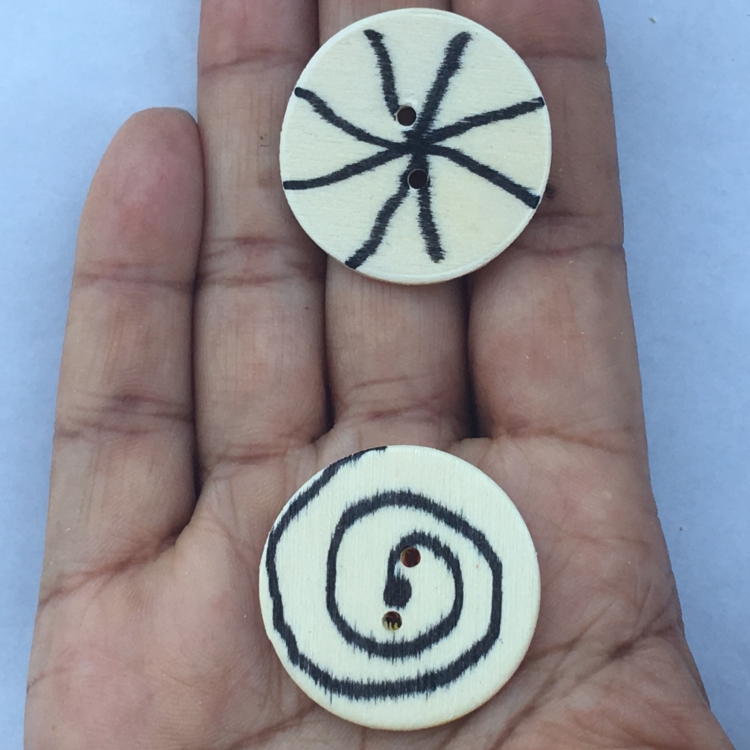 And on the other side.

Cut your thread so it is about 28 inches long.  Then insert into the wood disks. 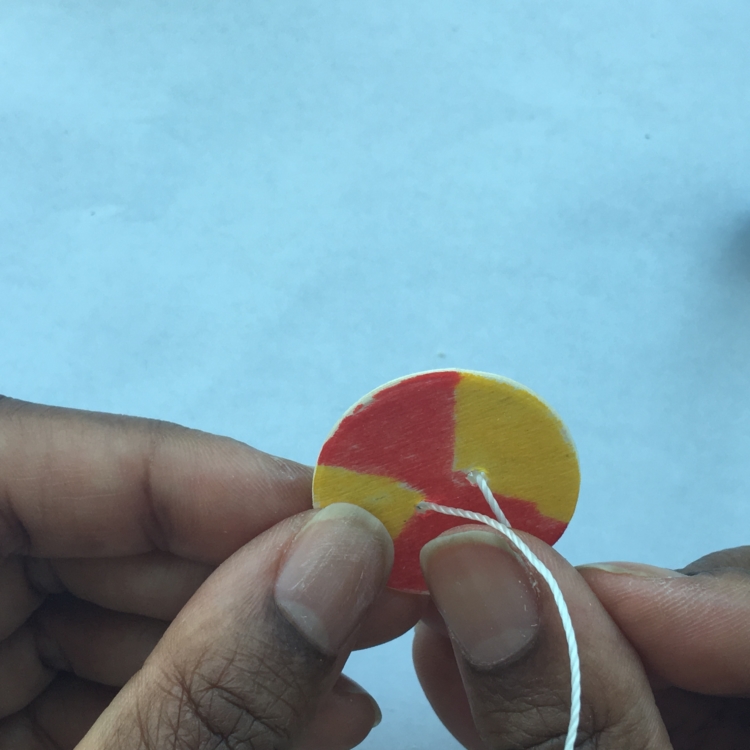 Tie the two thread sides together with a small knot.  Now I was ready to see if I could make the star shape and the square shape spin.  Check out the videos below to see the results of my experiment.  Also check out the different sounds each whirligig makes.