Our Paper Lantern Creature DIY Kits come with all the pieces you need to make your own whimsical bird. However, additional supplies like glue will be needed to facilitate the making of these whimisical birds. This kit is for the bird with the rainbow strip in the back.

If you would like to purchase a kit, check out my store on Etsy:

Assemble the paper lantern by first expanding the lantern.

Insert the wire expander as shown above.

Then on top, gently pull one of the wire loops on the paper lantern over the wire expander little “ears”.  Repeat on the other side.

Now your lantern is ready for the next step: attaching the feathers.

Now to figure out where to place the back strip, use the image above as a guide. You will be placing the tissue circles so that they line up with overlapped section where my bottom finger is pointing at and over where the red line is at.

Of note, some lanterns will not have such a defined overlap as that lines up with the center loop. In that situation, you can either draw a line (similar to the red one above) that lines up with the center loop, using a light colored marker. Or you can use the off center overlap and just make sure to adjust when it comes time to placing the wings and the other features.

You want to place the first tissue circle so that when attached, it ends past the diameter of the open lantern bottom. The image below shows how it should look. Apply enough glue to place two adjacent circles. The glue should always be placed between the wire spirals.

Place the first circle. You will be applying the lighter shade first. Or if you have the kit that does not differing shades of the same color, then you will use the shade that has the most circles first. The placement should always be placed from right to left, following the natural lantern spiral pattern.

Place the second circle making sure to overlap by about a 1/3 to a little less than half.

Apply additional glue, if needed, the place the darker shade over the two lighter shades.

For the next row: apply glue and then place the first light shade circle a little further to the right of the bottom row.

And finish with the dark circle centered between the two light shades. From this point on, continue to follow the placement of the second row. Continue to place the circles until you get to the last wire spiral before the top edge.

This is what the back strip should look like.

Next steps are to apply the white circles. I always apply the glue to the entire row (and sometimes as much as 2 or 3 above the current row I am working on) before I begin placing the circles.

For the placement of the white circles, you always go under the light shade on the same row.

But when it comes to applying the white circles, each new circle overlaps the adjacent to it. The image above helps to explain.

Almost done. View from the bottom.

When it comes to covering the top, you will have to place the circles so that they overlap the top as shown above. Minimal is the word to keep when applying the glue for the final layer of tissue. You want to add enough glue that the circle adhere to the paper lantern but not enough to seep through to the outside.

All done. Now hang the lantern up to dry. Hanging it to dry prevents the feathers from sticking to each other if you lay it down to dry. While the lantern is drying, start adhering the wings and eyes together.

Now when you receive your kit, the wings look like they are already adhered together.

But they are only held in place with removable glue dots. So you will need to pull them apart gently so you can adhere them correctly.

First off, place the wings in front of you showcasing the mirror image before you start adhering them. This is important to do because I have had students adhere the wings for the same side twice.

Taking the medium shade place a dab of regular strength glue on the curved side of the wing. Of note, I purposely added a lot of glue for this part so the you see the contrast.   But generally my policy is to use as little glue as possible.  Too much glue makes the whole project messy and is often difficult to clean it up without a mess. The glue should almost be translucent as you apply it.

Place the medium wing on the big wing so that you see a little bit of the big wing.  I like lining it up so that the first scallop on the tip of the purple wing, does not lie on the blue wing.  See photo above.

Using the same process as the step above, adhere the smallest wing.

Now to do the mirror of the wing, you can do it one of two ways. You can just eyeball it and place the pieces as precisely as you can. Or you can follow the next steps to get a more precise placement. First off place glue onto the smaller wing piece.

Then, place a scrap of parchment paper onto of the firs made wing. Then lined up the second small wing on top of the other small wing and parchment paper. Make sure the side with the glue is facing up. Use a binder clip to hold the wings in place.

Then gently lay the medium size on top of the small wing, lining it up with the previously adhered medium piece and using the scalloped sides as the guide before pressing it down on the glued side.

Repeat with the large wing piece. Then remove the parchment paper and binder clip and make any necessary adjustments including cleaning any glue that may have squeezed out.

All done with the wings. Set aside.

Now, time to do the eyes. Have fun with this part. You can adhere the eye pieces centered or as shown above, making it seem as if the bird is looking down.

Eyes all done. Set aside.

I’s beak time. If you look each piece of the beak. You will see that it looks like two shapes merged into one: a triangle sitting on top of a rectangle. First step is to create score lines which will help to shape the beak. Holding the first beak so that the pointy tip of the triangle is pointing down, fold the right side of the rectangle to create a square. Create a sharp crease on the folded edge. Unfold.

Repeat on the other side. Then unfold.

Holding the beak so that the point part of the triangle is pointing to the right, fold the beak in half horizontally. Create your sharp crease then unfold. Now repeat with the other beak piece.

Next add a dab of hot glue or regular strength glue to the inside of the right square.

Fold the beak so that the inner cut line of the right square lies along the fold line of the left square. Hold it in place until the glue has set enough to let go without it unraveling. You can also use a binder clip if using regular glue.

Next, apply glue to the bottom of one of the beak pieces as shown above.

Hold it in place until the glue has set. Then set the beak aside.

At this point, the lantern body should have set enough to be able to finish it. Using a pair of scissors, line them up so that you cut away the tissue paper around the lantern wire loops. 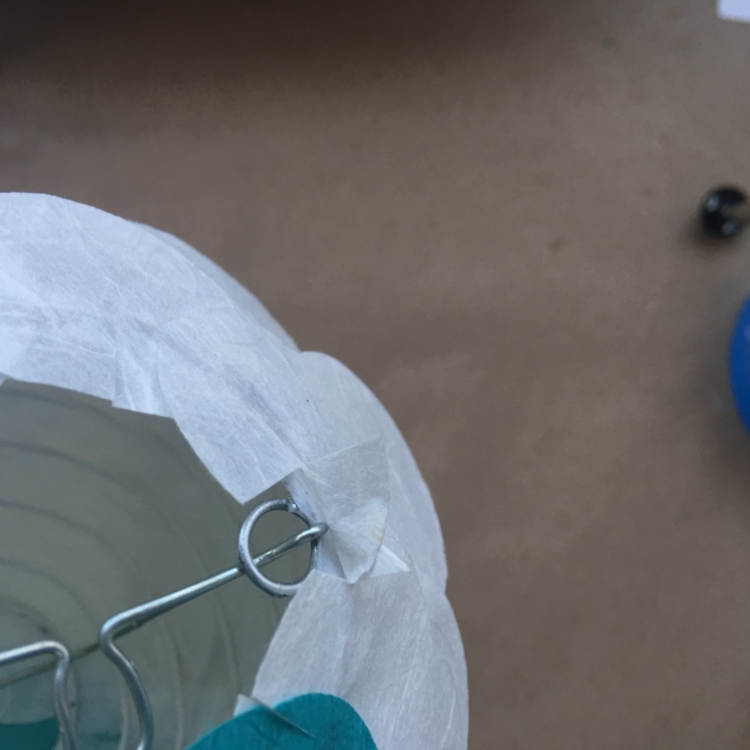 You want to expose the wire loops and the expander “ears” as shown above. 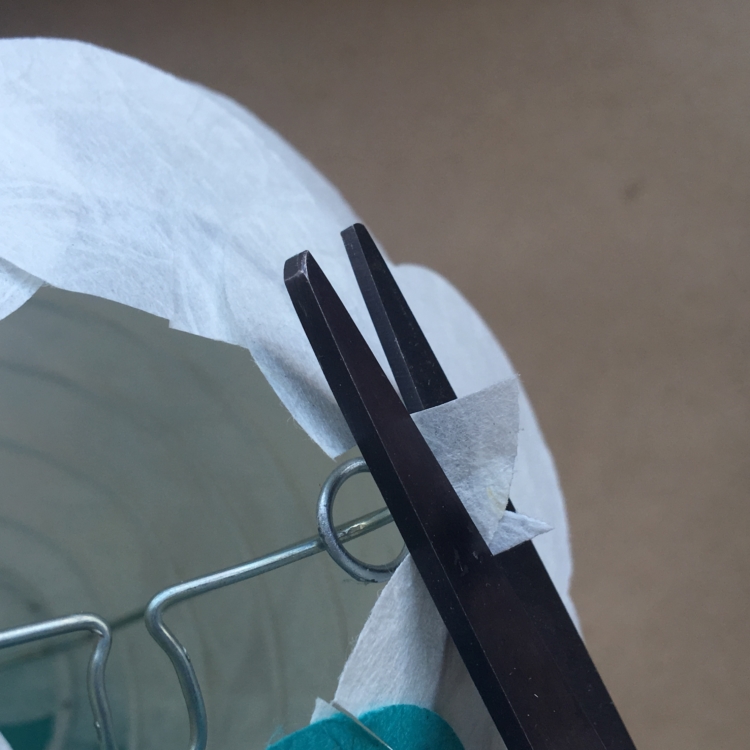 Cut off that tissue paper part that would have covered the loop and “ears”. 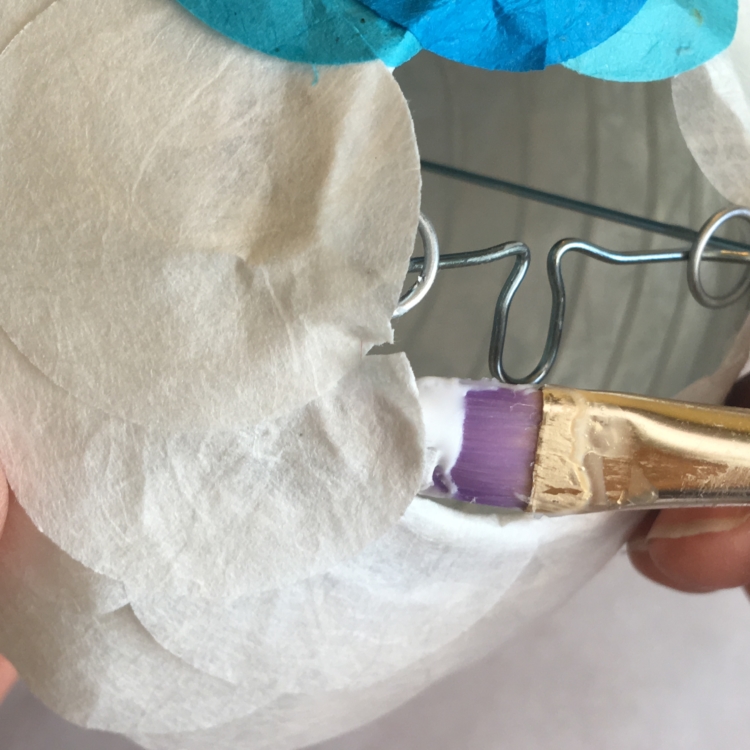 Then apply a little glue to the inner sides of the overlapped tissue paper.  Make sure if there are any double or triple layers that each layer is glued to the next before adhering it to the inside of the lantern. 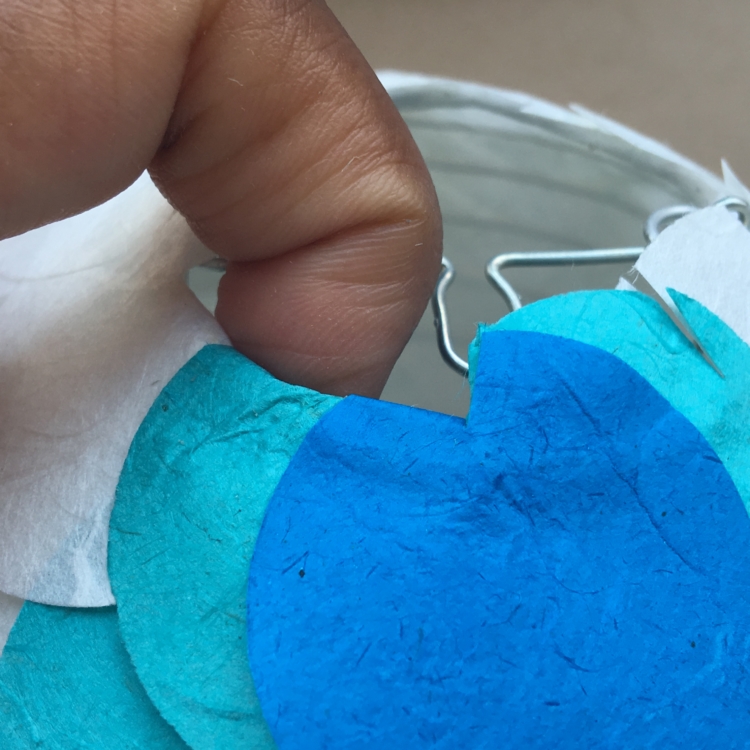 Once the glue has been placed, use a finger to press it against the inside wall of the lantern. 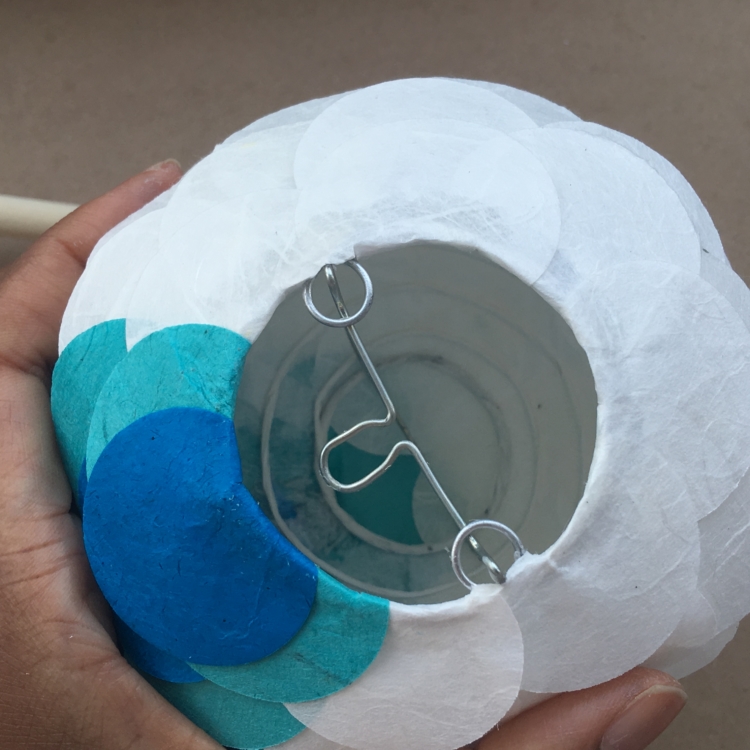 Repeat until the entire edge is encased in the tissue paper and it looks nice and neat. 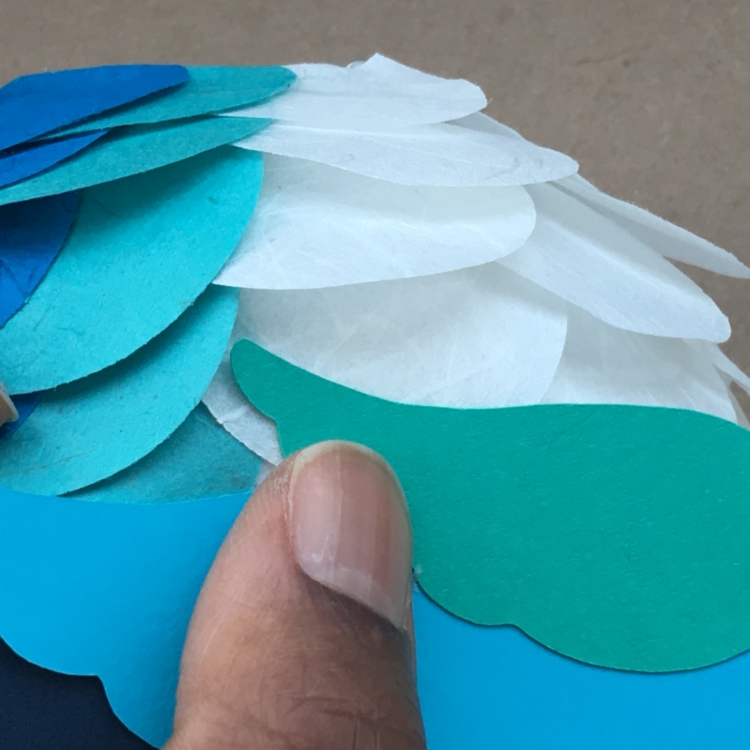 I use two methods to figure out where to place the wings: I want them centered vertically (so that means on the widest part of the lantern as well as using the middle wing piece to line up with the out edge of the lighter shade circles. 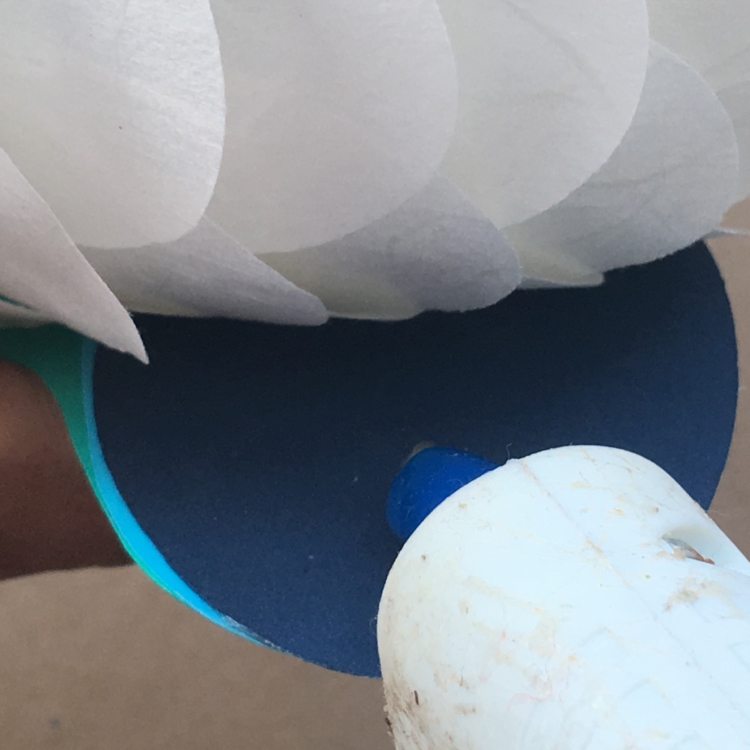 Once you are happy with the placement, hold the wing with one hand and apply glue with the other.  You will be placing the glue in the same area as before.  I prefer using hot glue because it sets much faster than school or tacky glue.  But if you don’t place it exactly, there is very little room for fixing the mistake.  Tacky or school glue does give you a little more room to move the wing in place but you have to hold it in place much longer before it sets, which leaves room for the wing to move out of placement.  The choice is yours. 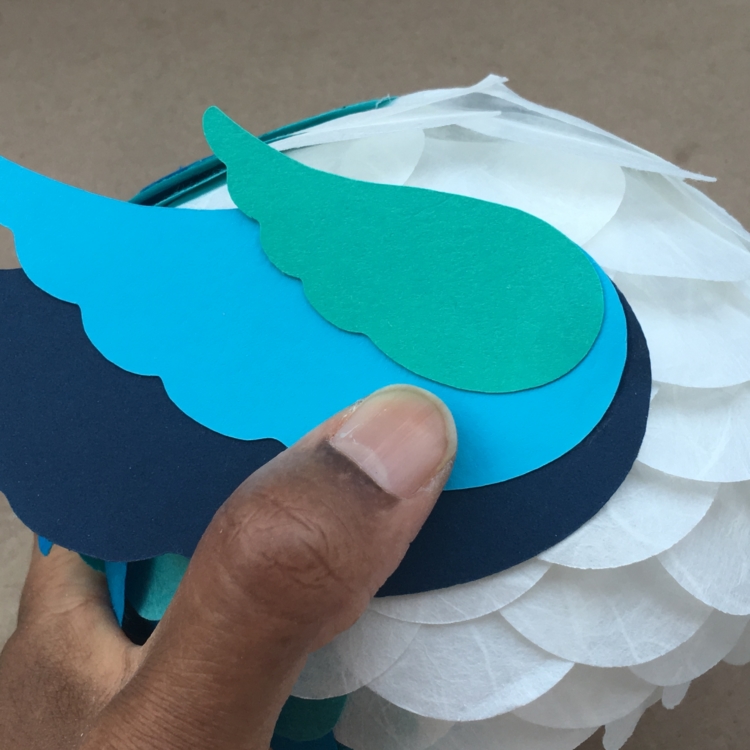 Placing the other wing requires some eyeballing to make sure the placement is very close to the first wing. 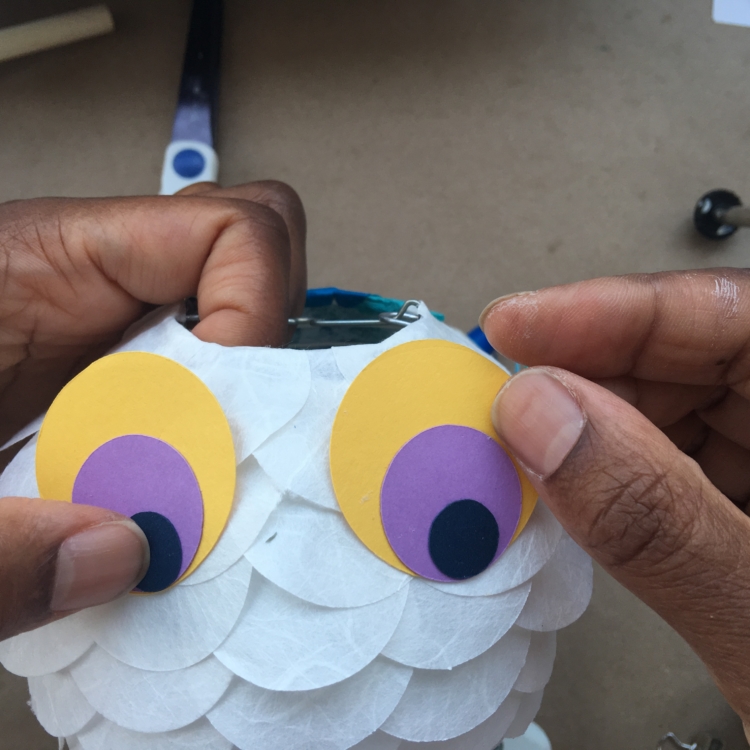 Once the wings have set, time for the eyes.  Where you place the eyes is up to you.  whatever looks good to you.  Adhere them on. 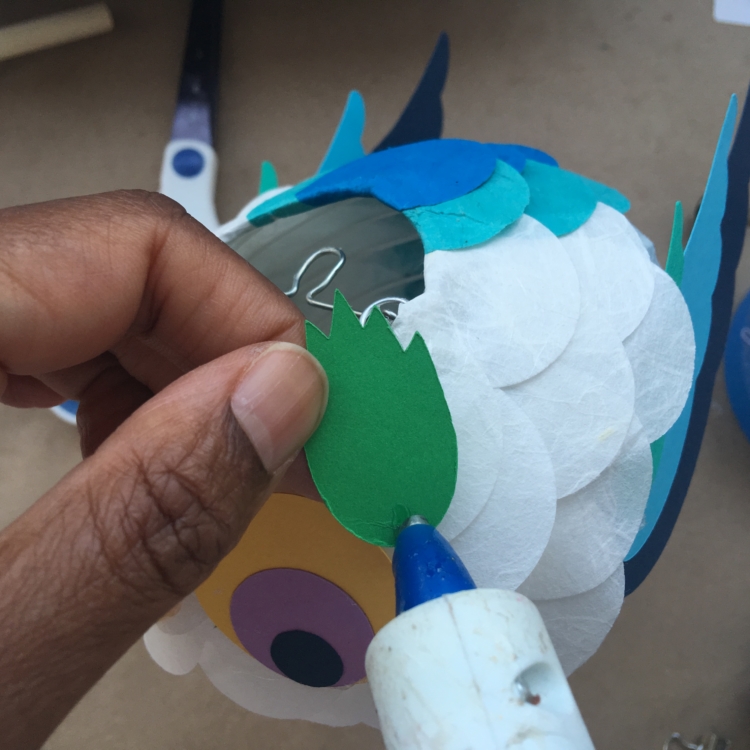 Add the eyebrows only after the eyes are adhered.  Figure out where you want to place them first before adding glue.  I add glue to the side facing the eye so that the two pieces are glued together.

Hold in place until the glue sets. 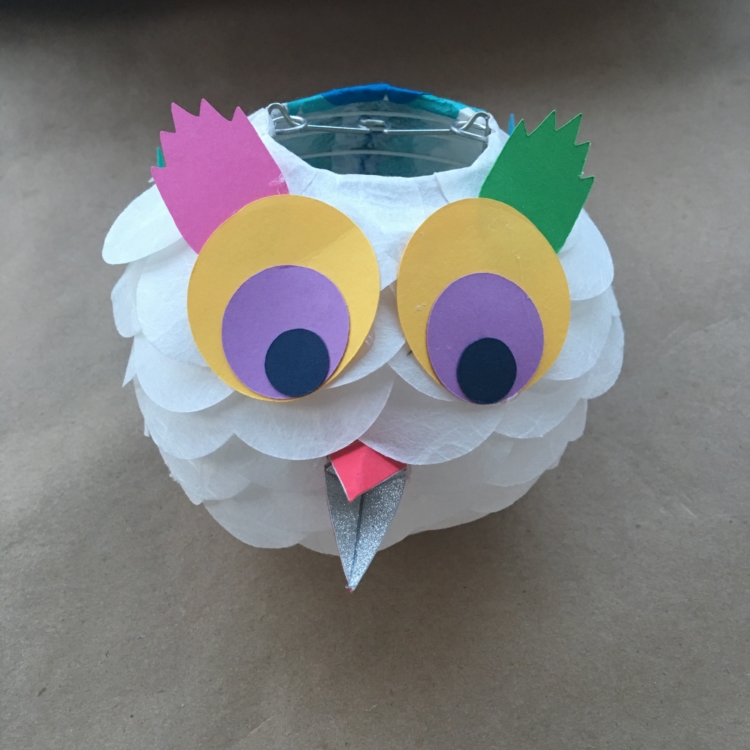 Last but not least, add the beak.  Again this is all about personal preference whether the beak is closer to the eyes or further away as I did for this one. 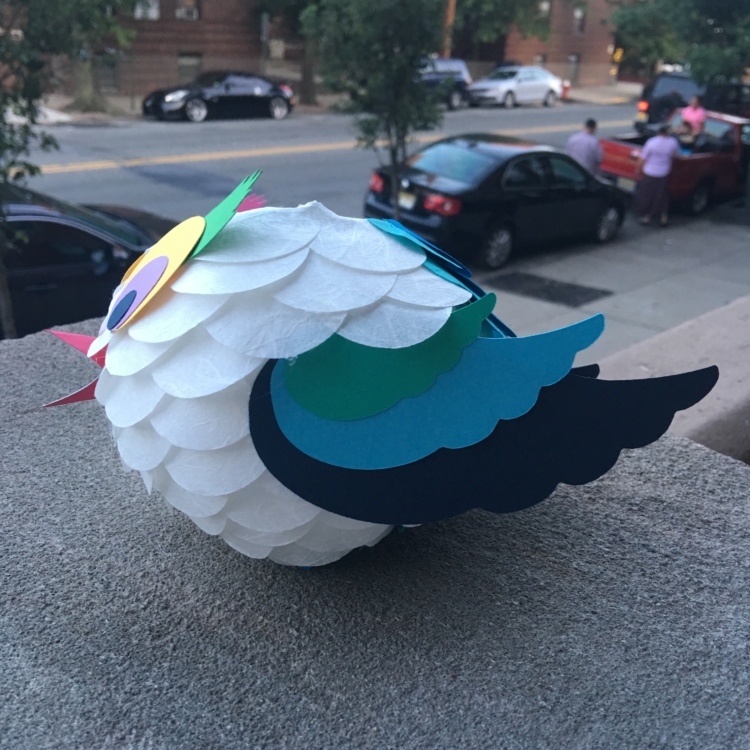 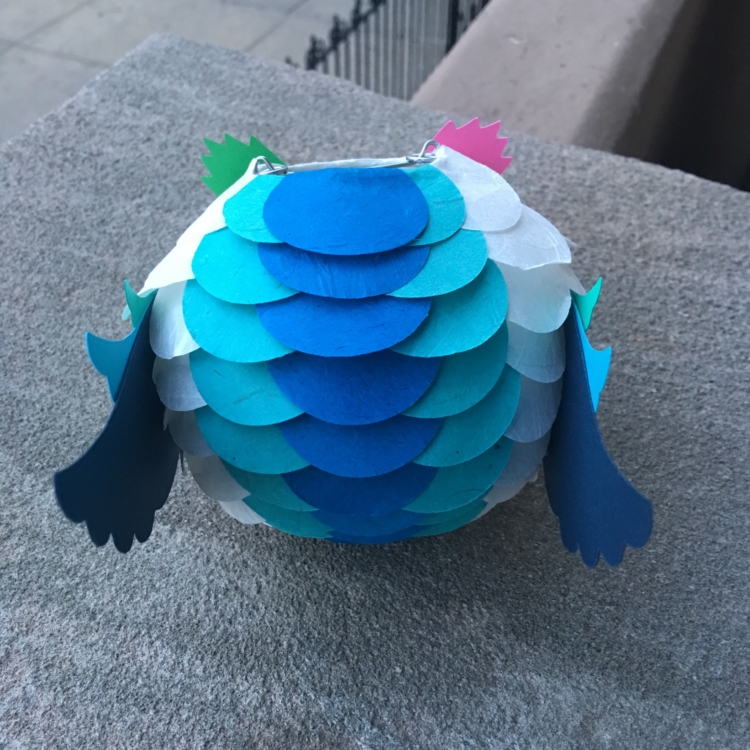 Shot highlighting the back strip. 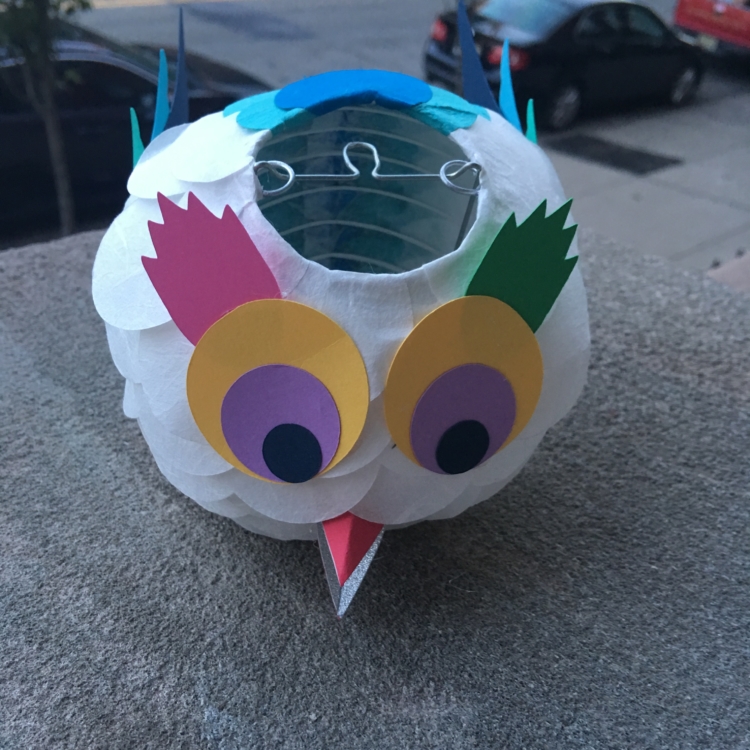 Almost done! Last step is attaching the balloon light. Use fishing wire or thread to affix on the loop on the light then tie around the loop on the expamder. Of note, while the life span of the light is about 8 hours, I’ve had some over the years last 3 or 4 days continuously.

Check out this video* to see how to use the balloon lights.